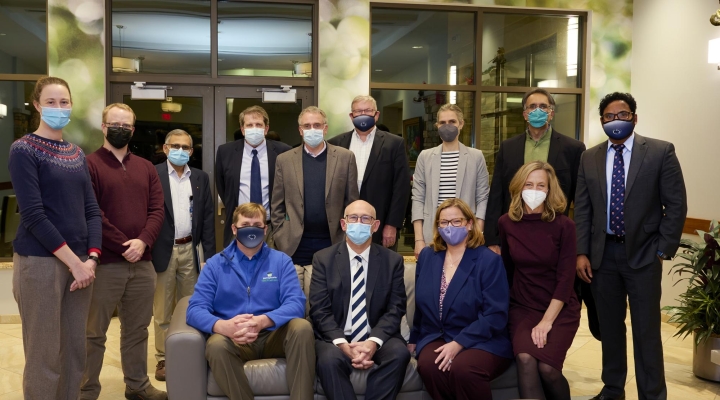 UNIVERSITY PARK, Pa. — An outbreak of the highly pathogenic avian influenza virus in poultry in 2014-2015 resulted in the destruction of more than 50 million chickens and turkeys in the U.S., causing billions of dollars in economic loss.

This animal disease outbreak — the worst in U.S. history — is one example of how devastating a foreign animal disease can be to animal agriculture and the country’s economy.

The resurgence of avian influenza in multiple states, including Pennsylvania, is once again bringing the importance of preventing animal diseases to the forefront, noted Suresh Kuchipudi, clinical professor of microbiology in Penn State’s College of Agricultural Sciences.

Exploring the emergence, spread and control of animal infectious diseases such as avian influenza was the focus of the inaugural Emerging Animal Infectious Disease Conference held Nov. 29-Dec.1, 2021, at Penn State. It was hosted by the College of Agricultural Sciences, the Pennsylvania Department of Agriculture and Penn State’s Center for Security Research and Education.

“Animal infectious diseases pose a significant threat to animal health and welfare and can cause economic instability and food insecurity for people worldwide,” said Kuchipudi, associate director of Penn State’s Animal Diagnostic Laboratory. “And with 60-70% of newly emerging infections zoonotic — or animal — in origin, we must prioritize research, preparedness and response strategies to safeguard human and animal health.”

The conference brought together leaders in animal health, veterinary diagnostics, epidemiology and disease surveillance, and agricultural economics to discuss current successes and lessons learned from past experiences combating foreign animal diseases, such as avian influenza and African swine fever.

The conference also highlighted the importance of the One Health approach in dealing with emerging animal and human infectious diseases. The concept of One Health is aimed at driving improvements in human, animal and ecological health through a holistic approach, explained Kuchipudi.

“The One Health approach to tackling zoonotic diseases considers all components that might lead to, or increase, their threat, including environmental, ecological and wildlife components, and domestic animal and human factors,” he said.

Providing the keynote address was Jenny Lester Moffit, undersecretary for marketing and regulatory programs for the U.S. Department of Agriculture, who emphasized the critical nature of research in sustainable food supply and food security, particularly in animal agriculture, because animal and human health are interconnected.

Attendees also heard from Pennsylvania Department of Agriculture Secretary Russell Redding, who discussed efforts to combat animal disease in Pennsylvania, where 340,000 jobs are supported by an animal agriculture industry with more than 200 million animals.

Redding said the importance of the animal agriculture industry was brought to light during the coronavirus pandemic when it was designated a “life-sustaining industry.” He also urged a focus on preparedness rather than response as the reaction to crises.

Rick Roush, dean of the College of Agricultural Sciences, said Penn State has outstanding resources and the expertise to lead initiatives to ensure the sustainability of animal agriculture, including a high-security diagnostic testing facility to address emerging threats.

“Animal infectious disease is a problem that requires the involvement of many people on an international scale,” he said. “Preparedness is critical, and we should consider lessons learned from past outbreaks to help us with strategies for the future. The recommendations made at the conference can lead to new strategies for monitoring and preventing disease threats to the livestock industry, including cutting-edge diagnostics for earlier detection.”